GHSC-PSM provides lifesaving medicines and supplies to nearly 260 sites like hospitals, health centers and dispensaries in Haiti. Each month, the project is responsible for keeping track of how much each site uses and resupplying them with the appropriate commodities. But with limited equipment and many without computers, internet access or even cellular service, monitoring the consumption of health commodities and appropriately restocking these sites is a challenge. This was the problem Evens Civil was thinking about when he joined GHSC-PSM two and a half years ago.

As GHSC-PSM’s data management officer in Haiti, Civil leads a team responsible for collecting commodity consumption data from sites and calculating future commodity needs. He saw first-hand the challenges related to collecting information from remote sites and the impact inaccurate or incomplete data had on ensuring continuous supplies of critical health commodities. When Civil joined GHSC-PSM, only 40 percent of service delivery sites were reporting consumption data on time, and even then, data was often incomplete or inaccurate. Inaccurate or incomplete consumption data can lead to waste when medicines expire unused or stockouts where patients return home empty-handed without the medicine they need.

That’s why — using his background in programming and database management — Civil developed a smartphone app that is already improving sites’ abilities to report consumption levels on-time and accurately. His initiative, called “Smartphones for Reporting,” puts smartphones into the hands of health workers at service delivery sites and enables them to use his app to quickly and accurately report consumption data. In its initial pilot at 50 sites, the app improved on-time reporting from 40 percent to 98 percent. Now, Civil will be helping GHSC-PSM expand the initiative to more sites and is eyeing a country-wide roll-out.

We sat down with Civil to discuss his work, the success of his app, and the future of consumption reporting in Haiti.

This interview has been translated from the original French.

GHSC-PSM: Thanks for taking the time to talk to us. To start, can you tell us about your role on the project?

Civil: I’ve been working as a data management officer on GHSC-PSM since September 2016. I oversee and supervise a team of data analysts and data specialists. So, my job is to look at the quality of the data that they are working with and to see if it will provide us with the kind of answers we're looking for on the project — especially related to the consumption of health commodities at our distribution sites.

GHSC-PSM:  Can you explain what this data is used for? 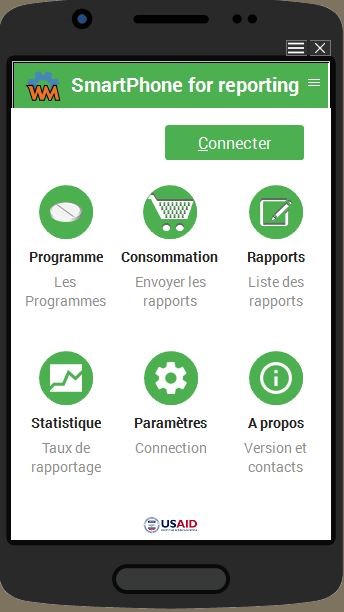 The home screen from Smartphone for Reporting. Using this system has improved on-time reporting from 40 percent to 98 percent.

Civil: Basically, it's monthly consumption data. It's how much medicine or commodities each of the sites goes through in a month. So, each site calculates how much they consume and they send the data report to us. Since we use an allocation system where we determine what quantities we're going to provide each site, we rely on this data to be able to calculate how much to provide them during the next distribution.

GHSC-PSM: Why was collecting data from the service delivery sites difficult?

Civil: So, prior to using the smartphones, we used a paper report as well as an excel spreadsheet that we provided to the sites for them to submit their commodity consumption information. The sites that have internet were able to email those reports to us, and the sites that don't have internet would call us and provide us with the data — or we would more than likely call them to get the information.

For the sites that are really far away, they would actually hand deliver the reports to either the next big site that is closest to them that would then send the report to us, or — on certain occasions — we had situations where one site would hand deliver a paper report to another site, who would then deliver it to another site, who would then either email it to us, or the network that worked with those sites could get it to us. So it was a very long process that made it very difficult for us to receive the reports on time.

The reports didn't come in on time, the reports weren't correct, and because it is so difficult to communicate with the sites, we didn't have a way of being able to correct the data at the source. So it would be after the data would get to us, we would start working with it, then we would realize the information was incorrect, then we would have to go to the site to actually validate the data and see that it is correct for us to use. So as you can imagine, all this made the process that much longer and it severely impacted the calculations we would need to make in order for the quantities to properly be estimated and for commodities to be delivered by the time they were needed.

GHSC-PSM: When we talk about the data being inaccurate, what do you mean by that?

Civil:  So it's kind of a mixture. Sometimes, at the sites, personnel would put the information into the wrong column on the form. But a lot of times, what would happen is the actual data — the actual numbers — would not make sense. How would we know that? For example, we tend to track monthly consumption over time, so we're able to look at a site and say, "OK, for the last 6 months or 9 months, this has been the consumption," and then when they submit a number that is completely off from that, we're able to say, "OK, this doesn't make sense." So then we have to call them and work with them and kind of figure out how they came up with this number. And so those are the two main ways that the data is often incorrect.

GHSC-PSM: How did you come up with the idea to create this system — including the smartphone app?

Civil: The idea started because I was being asked for information that would take me a long time to get because the data wasn't centralized and it wasn't easily accessible. Also, as the analysts and specialists on my team were analyzing the data, they’d have a spreadsheet with 260 tabs — one for each site. And some of these sites — these health institutions — they may each have anywhere from 40 to 800 products. So imagine going through 260 tabs in one spreadsheet with hundreds and hundreds of lines — you can imagine how cumbersome it was to mine all of that data.

So our first idea was to create a data warehouse where we would be able to have access to this data a lot easier and a lot quicker. So I started aggregating the data into one central location. And it is by doing that first step that we started realizing -- Oh we're having problems receiving reports on time to even get the data -- and then realizing that the data that is not only late, is also inaccurate. So then the idea evolved from just being a central repository of data that is easily accessible, to having this multifunctional tool. A tool that not only quickly captures the data, but also quickly uploads and stores it where staff have access to it to enable the analysis and the calculation of the quantities that are to be delivered in the next distributions. 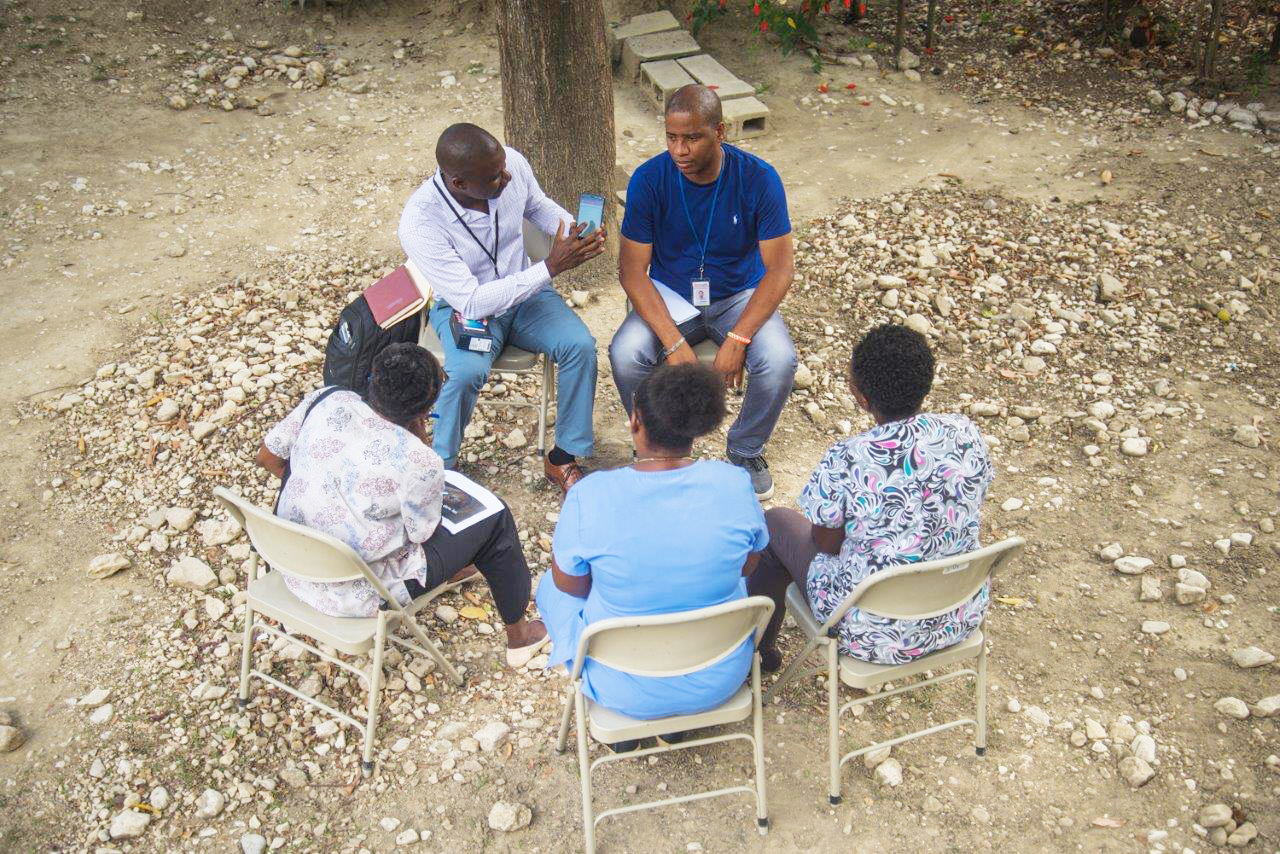 Evens Civil, GHSC-PSM data manager, teaches health workers how to use the Smartphone for Reporting app for improved supply planning.

GHSC-PSM: How does the smartphone app reduce the time needed to upload the data into your system?

GHSC-PSM: What if a site doesn’t have internet access or cellular data service? Does the app still work?

Civil: As part of the “Smartphone for Reporting” initiative, sites that need them are receiving smartphones as well as credit for internet. In addition, even if the site doesn't have internet the app is able to store data when its offline and then automatically connect to the internet once it has a connection again. So, let’s say site personnel submit their report during a time when there's no internet on the phone. The app will save the data, and then the moment that they have internet, the data will automatically upload.

GHSC-PSM: You mentioned before that data quality was a problem. Has the app improved that?

Civil: Yes, absolutely, data quality and the accurateness of the data has improved.

The system actually forces site personnel to do a physical inventory before they put the information into the telephone, so it forces them to look at how much of each commodity they’ve used, how much they had and then that helps them to calculate what's left, and then that's the data that's put into the phone.

The other thing that happens is the site personnel now understand a little bit better that when they submit their information, it goes automatically into our system. So now they end up having this kind of pressure to submit the right information, and so we're definitely seeing an improvement in the quality of the data that is being submitted.

GHSC-PSM: Now that the pilot is complete, what’s next for this initiative?

GHSC-PSM: Do you think this system could be used even beyond Haiti?

Civil: Yes, we're pretty sure the challenges we're having in Haiti — some other countries may be having those same challenges. It would be great to be able to see others utilize this system.

Success StoriesConnecting People with Technology: A Data-driven Approach to Optimizing the Medicine Supply Chain in KwaZulu-Natal
May 12, 2021
Across the South African public health sector, advances in information technology are playing an increasing role in meeting patient needs, reducing operational costs, and improving efficiency. In the public health supply chain space, the increased use of systems like the National Surveillance…
Success StoriesKnow Your Community: Developing the EDP Stakeholder Database for Effective Stakeholder Management
May 12, 2021
Stakeholder management is the complex process of maintaining good relationships with the people and groups who have the most impact on your work. In order to keep these stakeholders committed to initiatives, effective communication is key. The United States Agency for International Development (…
News ArticleForecasting and Supply Planning: Despite Success in Overcoming Many Challenges, Countries May Prefer to Return to the Pre-COVID Model with International Advisors
May 10, 2021
COVID-19 began to impact the USAID Global Health Supply Chain Program-Procurement and Supply Management (GHSC-PSM) project by March, 2020, with travel restrictions and other public health measures greatly limiting in-person training and other capacity-building activities. The impact of COVID-19…
END_OF_DOCUMENT_TOKEN_TO_BE_REPLACED
Twitter Embed