In the early 2000’s, three of Catherine Nalungwe’s children died one after another before the age of three. The cause of the children’s death became a source of pain and confusion for the family. Catherine later tested positive for HIV in 2002, but she had no access to treatment through nearby health facilities at that time. With improvements in access to HIV/AIDS services in Zambia, she started treatment in 2004.

As part of its commitment to the UNAIDS 90-90-90 strategy, the Government of the Republic of Zambia aims to provide a reliable supply of health commodities to health facilities across the country. This includes the continuous supply of antiretroviral drugs (ARVs) for people like Catherine living with HIV and the approximately 800,000 patients on antiretroviral treatment (ART) out of an estimated 1.2 million people in need.

To support Zambia’s HIV/AIDs goals, the USAID Global Health Supply Chain Program-Procurement and Supply Management (GHSC-PSM) project is a key partner to Zambia’s Medical Stores Limited (MSL), the institution mandated to warehouse and distribute commodities to service delivery points. In the last fiscal year, GHSC-PSM delivered a continuous supply to MSL of $14.6 million worth of tenofovir/lamivudine/efavirenz (TLE), currently Zambia’s preferred first-line ARV regimen for adults and adolescents. In collaboration with other partners, GHSC-PSM also supported MSL to store and distribute TLE and other ARVs, and critical laboratory and other health commodities to the last mile. The project also provided technical support to the Ministry of Health for forecasting and supply planning to determine the country’s health commodity needs to ensure a steady supply of TLE and other ARVs to health facilities. 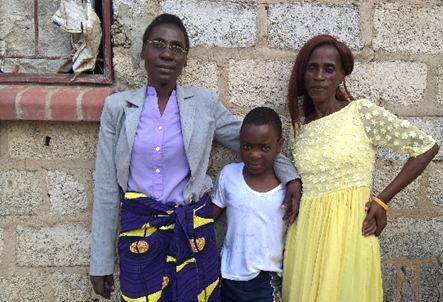 Now 48 years old, Catherine accesses her TLE from George Clinic in Lusaka, where she and six others formed a support group. She remarried in 2004 to a man who is also living with HIV, and together they have two children who are 10 and 9 years old, both HIV negative. “My life is totally changed. I am strong and able to work. Thanks to the government and the donors who continuously provide these ARVs for free.”

Catherine is a source of encouragement to people living with HIV and who plan to have children, including her own family, who speak more openly when there is illness within the family. Her sister was encouraged by Catherine’s boldness and sought out an HIV test for herself. She tested positive, and is now receiving life-saving HIV/AIDS treatment as well.

Beyond ARVs, other commodities such as laboratory tests are also critical for patients with HIV. One such recipient of quality laboratory tests is Ruth Nyambe, a farmer living with HIV in Mpango village in Chongwe District, Zambia. Ruth tested positive for HIV and began treatment in 2008 after she fell ill and was admitted to a hospital. During the worst of her illness she could not work and was therefore unable to economically support herself or her family.

While ARVs helped save Ruth’s life, laboratory tests played a critical role in helping her get well enough to participate in life again. Initially her CD4 (a type of blood cell key to fighting infections) count was low, but the clinic supported Ruth with food supplements to improve her diet. Before long, Ruth’s CD4 count rose, greatly improving her health and enabling her to help support her family. Ruth again became financially productive, growing maize and selling it to Zambia’s Food Reserve Agency.

Ruth is grateful to the Chongwe District Health Centre because of the uninterrupted supply of her antiretroviral drugs. “I am very happy because I can do what I could not do before because the drugs keep me healthy,” she said. Ruth encourages others, “don’t be afraid, this disease is just like malaria. Go to the hospital and do the tests, it will save your life.”

Heading
Working Together for a Continuous Supply of Health Commodities
Body

Previously, MSL was limited in its ability to distribute health commodities to facilities. For example, the agency did not own refrigerated trucks to carry cold chain commodities. Instead, GHSC-PSM supported commodity distribution using a private-sector distributor to deliver to the last mile. In November 2017, MSL received a fleet of 12 distribution trucks donated by the President’s Emergency Plan for AIDS Relief (PEPFAR) through USAID and GHSC-PSM. Three of the 12 trucks are two-ton refrigerated trucks that provide MSL with the capacity to distribute its own cold chain products for the first time.

In spite of poor roads in some areas, MSL staff used the three trucks to reach 95 percent (209 out of 219) of sites. The last ten inaccessible sites received their supplies from nearby facilities using vehicles that could more easily reach them. MSL maintained the required temperature for the cold chain distribution throughout the distribution cycle.

With the expansion of its cold-chain distribution platform to the last mile, MSL will continue to deliver safe medicines and laboratory reagents to communities and help improve the health of individuals in Zambia as they receive quality testing and the necessary medicines that could save their lives.

News ArticleImproving Availability and Rational Use of Health Products in Guinea
September 23, 2021
In Guinea, there is a relatively strong Logistics Management Information System (LMIS) in place, and the USAID Global Health Supply Chain-Procurement Supply Management (GHSC-PSM) project has developed an interoperability between the LMIS and the health management information system (DHIS2). Since…
Success StoriesBreaking through Barriers in Ghana to Reach the Last Mile
September 16, 2021
When Family Planning 2020 (FP2020) was launched in 2012, it aimed to make high-quality, voluntary family planning (FP) services, information and supplies more available, acceptable and affordable for an additional 120 million women and girls in the world’s poorest countries by 2020. Ghana made…
News ArticleMedicines Mothers Can Rely On
September 16, 2021
Djélika Doumbia remembers how frightening it was to rush her newborn son, Karim, to the hospital shortly after bringing him home.  He had fallen very ill due to an umbilical cord infection. While waiting anxiously at the hospital, a health worker explained that using shea butter on the cord…
END_OF_DOCUMENT_TOKEN_TO_BE_REPLACED
Twitter Embed