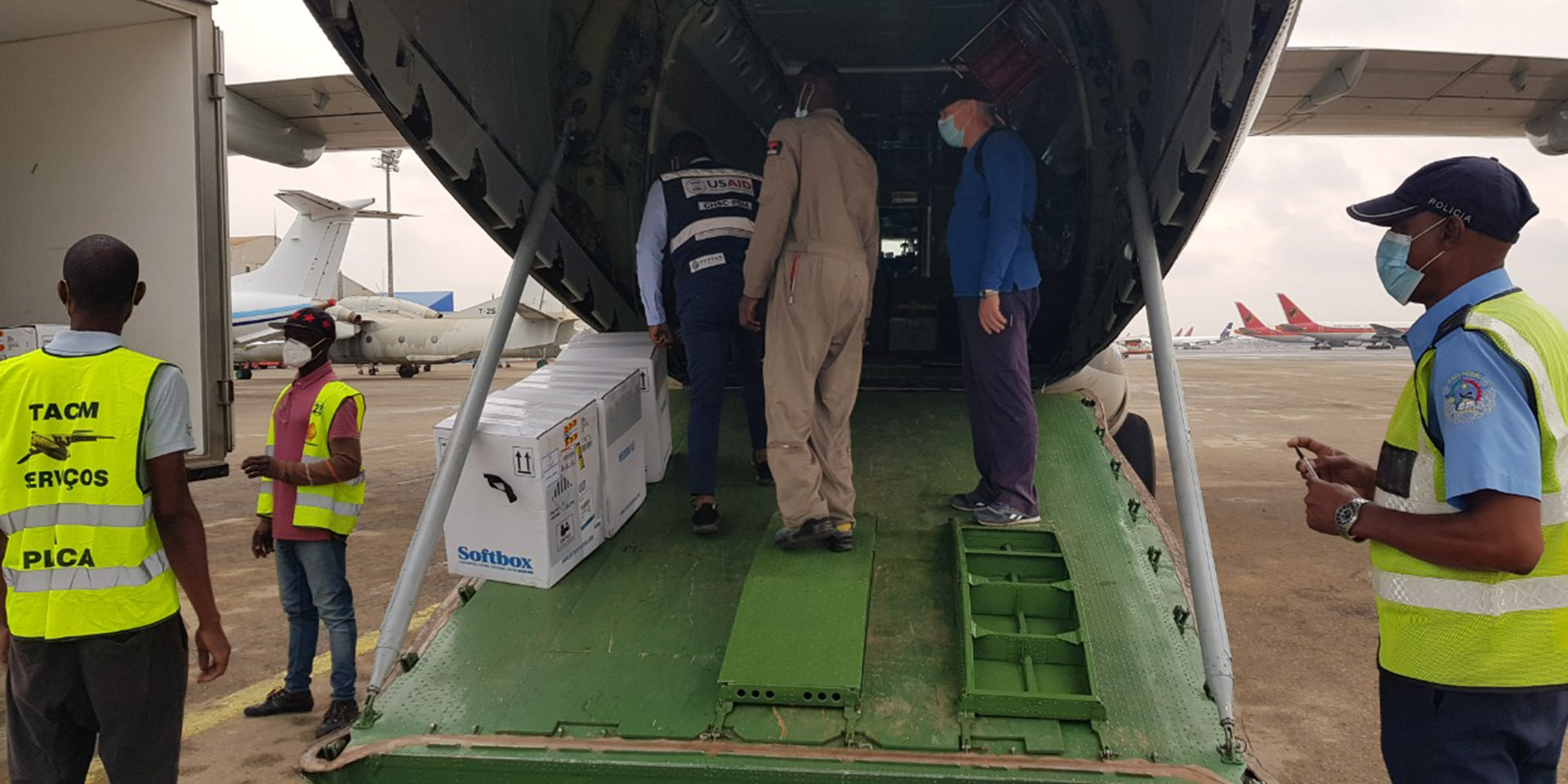 The term ‘’cold chain’’ refers to a temperature-controlled supply chain comprising refrigerated production, storage, and distribution facilities supported by equipment that can constantly maintain the required low-temperature range. This cold chain is required to preserve the integrity and quality of the vaccines until delivery to end users.

In Angola, the USAID Global Health Supply Chain Program-Procurement and Supply Management (GHSC-PSM) project is providing technical support to the Ministry of Health (MOH), Agency for Medicines and Medical Supplies Central Medical Store (CECOMA), and other implementing partners to maintain COVID-19 vaccines in cold or ultra-cold chains until delivery to the last mile. This effort seeks to build on past and current investments to strengthen, integrate, and optimize vaccine supply chain systems to help achieve COVID-19 vaccination targets.

“The reach of population immunization depends, at all levels, on everyone’s participation and dedication, “said Emerald Norman, COVAX Senior Technical Advisor for GHSC-PSM in Angola.

Specifically, GHSC-PSM is working to improve health authorities’ ability to successfully store and distribute all approved vaccines. The project supported the installation and programming of ultra-cold chain (UCC) freezers across eight provinces. COVID-19 vaccine distribution required mobilizing both government fleets and private-sector, third-party logistics (3PL) providers to distribute from all levels to the last mile and in a manner that guarantees the safety and efficacy of the vaccines to meet immunization demands. “The international challenge is to provide vaccines that are safe, of good quality, and in good condition,” said Dr. Alda de Sousa, coordinator of Angola’s National Vaccination Program.

The work began with the MOH procuring vaccines and receiving donations from other partners such as the U.S. Government through USAID. GHSC-PSM worked with UNICEF and the World Health Organization (WHO) to conduct quality inspections and validations upon arrival to ensure the vaccines meet international and country-level quality specifications before being received into central storage at the Central Vaccine Deposit.

Proper storage, handling, and distribution of COVID-19 vaccines require a number of warehousing tools and equipment: specialized ultra-cold freezers; refrigerated chambers for defrosting, mini solar and electric freezers for portable storage; and isothermal boxes, accumulators, and other cooling agents for transit to the final destination.

The use and maintenance of vaccine storage equipment requires qualified personnel. For this purpose, GHSC-PSM works with experienced logisticians from the Central Vaccine Deposit to share technical knowledge related to the transport and storage of vaccines. The MOH further outsources trained technicians to maintain the cold chain equipment.

The team set about finding solutions to several challenges unique to Angola’s supply chain and the nature of the COVID-19 vaccine:

1. Inadequate knowledge and supply chain capacity gaps for last-mile delivery­. Moving vaccines from the central level to municipalities through UCC hadn’t been done before; now the government needed ways to transport ultra-cold products to towns and remote villages.

2. Timely delivery to achieve coverage targets: To curb the spread of COVID-19, the MOH needed to ensure rapid delivery and uptake of the vaccines. To achieve this, the supply chain needed to assure adequate and timely availability of safe, quality, and effective vaccines at the last mile, while public behavioral change communication was optimized to boost acceptance and willingness for immunization.

3. Controlling temperature excursions during transport: Some COVID-19 vaccines need to be kept as cold as -60 to -80 degrees Celsius. The vaccines required temperature tracking at every stage of transit to prevent early defrosting and wastage. To keep vaccines cold to the last mile, they are kept in ultra-cold isothermal boxes when moving from the central to the provincial level, and in frozen accumulators—according to the manufacturer's recommendations—when transported from the provincial to the municipal level on motorbikes and boats and by people on foot.

4. Adequate storage facilities: Unlike at the provincial level, municipalities are not equipped with ultra-cold freezers and required the necessary equipment to comply with the manufacturers’ recommendations regarding the storage of vaccines.

6. Human resources: Angola had enough technicians and operators trained in WHO’s Expanded Program on Immunization procedures but needed to  improve the technical capacities of logisticians at all levels and to reduce the need to rotate technicians from one area to another.

The Government of Angola entrusted GHSC-PSM with addressing the challenges because of the project’s technical expertise and cold chain knowledge.

GHSC-PSM began by conducting a review of local private and public cold chain capacity before  vaccines arrived. The country had already done a pre-assessment to confirm adequate capacity for a stable energy supply at the various vaccine centers, with solar panels, back-up generators, and electricity. GHSC-PSM helped the MOH to install donated UCC equipment in provinces. However, installation required a cohort of trained logisticians and supervisors. UNICEF provided training at the central level while GHSC-PSM provided it at the provincial level to ensure the physical integrity and sustainable operation of the equipment at provincial warehouses.

GHSC-PSM, through a thorough and competitive procurement process, contracted with a third-party logistics (3PL) provider, complementing the government fleet, to ensure vaccines were distributed to the hardest-to-reach areas of the country.

Implementation of UCC activities began in May 2022 to distribute vaccines from central stores to 14 provinces. By July, GHSC-PSM had supported distribution of almost 2.8 million vaccines to vaccination sites in 13 of Angola’s provinces. (Luanda, the 14th province and capital, managed its own vaccine distribution.)This remarkable achievement was the result of careful planning and diligent work of an entire team of supply chain staff, healthcare workers, and implementing partners.

Success of the program relied on monitoring the flow of information and effective communication between the different levels of the supply chain are essential for delivering and receiving vaccines. Teamwork, appreciation, and involvement of technicians all along the way delivered a major advantage. The distribution program also required intensive supervision of vaccine logistics.

Going forward in Angola, GHSC-PSM will conduct an inventory of all cold chain equipment in use to inform future equipment acquisition. Training in logistics at all levels will be ongoing.

“Good preparation, including around staffing and training needs, cold-chain logistics and getting the regulations right, were just some of the reasons Angola was one of Africa’s first countries to receive vaccines,” said Dr Djamila Cabral, WHO Representative in Angola. “The commitment and energy from Angola’s government to get the vaccine rollout right was exemplary from very early on.”