In 2018, Eswatini's laboratory system was experiencing challenges in meeting the need for viral load (VL) testing for people living with HIV. Viral load testing coverage was only 55 percent nationally, which meant that many patients being treated for HIV could not access testing to know their health status, and their clinicians could not monitor their treatment results.

At this time, Eswatini was just beginning to conduct viral load testing for HIV, having introduced a few VL instruments into its laboratory system. Viral load testing had become the preferred method of testing for HIV; the previous primary method, CD4 testing, was transitioning to being used only as an indicator for advanced HIV illness.

The country also introduced Early Infant Diagnosis (EID), placing one low-throughput EID machine at the National Reference Lab (NRL) to handle all testing for the country.

This new testing capacity was an important development for adults and infants who needed HIV testing in Eswatini. But the country still faced several challenges: 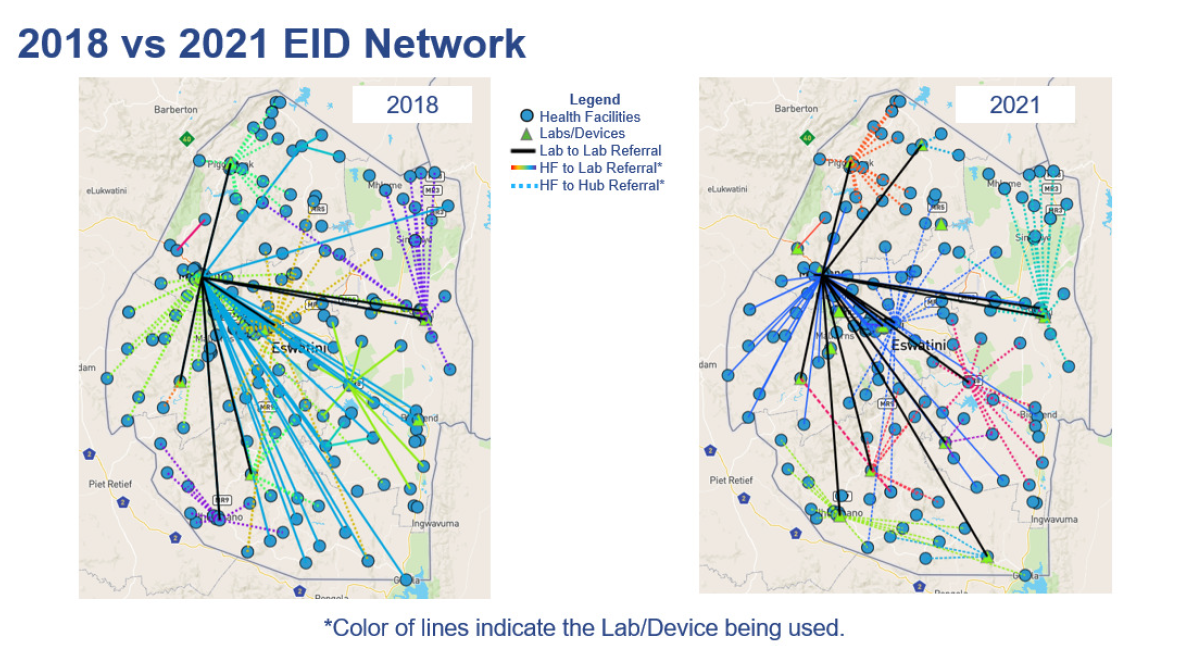 In August 2018, the country conducted its first DNO exercise to determine how the VL and EID laboratory system could be optimized and how point-of-care (POC) machines, which are placed at hospitals and other health facilities, could be integrated into the system for improved access to testing and reduced turnaround times.

Based on the DNO exercise and recommendations, EHLS took the following actions:

Additionally, EHLS began phasing out a Roche platform called CAP/CTM96, a low-throughput machine that was nearing the end of its life, and replacing it with a newer-generation, higher-throughput Roche instrument called Cobas 6800 that could do both EID and COVID-19 polymerase chain reaction (PCR) tests.

EHLS also moved to an innovative reagent rental model, in which it would rent VL instruments from manufacturers instead of own them, and the country would place guaranteed routine orders with the same manufacturers for reagents and other consumables. Manufacturers would also provide regular maintenance and repair for the machines to keep them operational. Costs to the country for instrument rental, reagents, and maintenance would be included in one all-inclusive price per test. This type of agreement has the potential to increase instrument uptime, prevent reagent stockouts, and increase testing access and coverage.

Heading
Outcomes of the 2018 DNO
Body

VL testing turnaround time was reported to be five working days, compared to two weeks in 2018. Coverage for EID testing at two months of age was strong at 95 percent; and at 12 months months of age, the EID network exceeded targets, achieving 107 percent of the testing coverage target.

CD4 testing was expected to reduce due to increased VL coverage, but it didn't reduce as much as expected.

VL: VL testing capacity increased from 180,000 to 292,320 tests for the plasma instruments; however, utilization decreased from 96.5 percent to 59.9 percent. This increase in testing capacity and reduction in utilization resulted from the greater-throughput Cobas 6800 instrument in Mbabane and Panther platforms in Nhlangano. Testing was highly centralized, with most samples having to travel to reach one of the regional labs with the necessary testing equipment.

EID: EID instrument utilization rates for both platforms — AlereQ and CAP/CTM96 —increased, from 41.5 percent to 55.6 percent and from 72.4 percent to 74.9 percent, respectively, reflecting the decentralization of EID testing. More samples (18.3 percent more) were being handled at POC sites than previously because of a decrease in turnaround time from two weeks with conventional EID testing to one day with the new instruments.

CD4: CD4 capacity increased for both conventional systems (instruments placed at a referral laboratory) and POC systems. Capacity for conventional CD4 instruments increased from 284,160 to 416,160 tests, while capacity for POC CD4 instruments increased from 585,600 to 801,600 tests. Utilization rates decreased for both testing platforms — from 10.8 percent to 9.6 percent for POC instruments, and from 11.3 percent to 4 percent for conventional platforms — due to the increase in viral load testing coverage. More of the tests were being handled at facilities, though the network was already fairly distributed to facilities via PIMA devices.

TB: For TB testing, the number of GeneXpert sites increased from 28 to 32 and testing capacity increased from 155,520 tests to 190,080 tests, a 30 percent increase. But the low utilization rates seen in 2018 further dropped more than 50 percent, from 20.6 percent to 8.8 percent. This could have been a result of decreased TB incidence due to mask wearing to prevent COVID-19 transmission. The capacity increase due to the added machines also contributed to the reduced utilization rates.

Objective 2. To examine different scenarios for phasing out the CAP/CTM96 machine for EID testing, increasing referrals to conventional sites for CD4 testing, and adjusting the GeneXpert multiplexing (TB, EID, and VL testing) strategy.

Final recommendations – and some subsequent actions – are as follows:

Success StoriesMonitoring customer satisfaction to respond to the voice of health facilities: Experience from Ethiopia
January 18, 2023
In this new series from GHSC-PSM, we are sharing recent insights and lessons learned from across our country programs. In this fourth and final article, we discuss how an annual customer satisfaction survey, and a web-based customer feedback monitoring system are helping the Ethiopian…
News ArticleLeveraging Technology to Improve HIV Commodity Quantification in Nigeria
January 11, 2023
With an estimated 650,000 deaths globally, the AIDS pandemic took a life every minute in 2021 despite effective HIV treatment and tools to prevent, detect and treat opportunistic infections. Of this number, about 51,000 persons reportedly died from AIDS-related ailment in Nigeria, which has an…
Success StoriesBuilding a specialized cold chain to deliver COVID-19 vaccinations in Namibia
January 3, 2023
This story first appeared in, “Driving Last-Mile Solutions to Ensure Access to Public Health Commodities.” Because of the important insights and lessons learned that it provides about cold chain and ultra-cold chain for COVID-19 vaccines, we are republishing and resharing separately.  The…
END_OF_DOCUMENT_TOKEN_TO_BE_REPLACED
Twitter Embed