Simple Solutions are a Net Positive

Download a PDF version of the technical brief here.

Since 2016, the U.S. President’s Malaria Initiative (PMI), through the USAID Global Health Supply Chain Program-Procurement and Supply Management (GHSC-PSM) project, has purchased over 219 million long-lasting insecticide-treated bednets (LLINs) to help protect communities around the world from malaria. Laid out flat, these nets could nearly cover the state of Connecticut.

The importance of these LLINs cannot be understated. According to the World Health Organization, in 2019 over 229 million people globally suffered from malaria, with over 60 percent of the resulting deaths from this preventable disease occurring in children under age five. Nightly use of LLINs is one of two primary methods of preventing people around the world from getting sick from malaria in the first place. However, in 2019 an estimated 54 percent of people at risk of malaria in Africa were not sleeping under an LLIN. Furthermore, nets need to be replaced every two to three years, after the active ingredients have lost efficacy or the fabric has begun to wear out. These two details mean that demand for LLINs remains high and constant.

PMI supports countries to maintain supply of LLINs for mass distribution campaigns, where millions of people receive or replace their nets at the same time, and for continuous distribution during antenatal visits with pregnant women, for example. This ongoing process requires strategic planning and execution, including dozens of procurements from manufacturers, which can be a complex task given the number of countries requiring LLINs.

The more LLIN variations manufacturers have to produce—with different colors, sizes, shapes, and logos—the more complex production becomes. For example, manufacturers may have to source and store more variety of materials and adjust equipment and assembly processes between production runs. All of these can affect planning for large volumes of orders which have to be coordinated across buyers for multiple countries. Increased variations can also increase the opportunities for errors.

When a country places an order for LLINs, the process requires extensive planning, including reviewing details with the recipient country and coordinating with manufacturers to schedule production. Furthermore, use of country-specific details like logos means finished LLINs can only be used in that country. This can make it challenging to re-direct orders from one country to another in the event of an unexpected stockout, urgent need due to natural disasters or other emergencies.

LLINs are produced based on various product specifications, including material, dimensions, active ingredients, color, shape, artwork, and packaging (see Figure 1). In 2017, GHSC-PSM initiated a broad study, which found that PMI had historically purchased nets with many different specification variations, even before countries added customization like logos and instructions. With those made-to-order customizations, there were more than 35 different final LLIN product variations across more than 20 countries.

The project’s 2017 study examined all of these net variations to weigh the benefits of streamlining LLIN production into fewer options that would still appeal to a global market. The study included an extensive analysis of stakeholder interviews, a cost-of-goods-sold analysis, and a review of manufacturing processes, as well as additional surveys, literature reviews, and supporting data analyses.

Through this research, the project identified the cost and lead time drivers for LLINs, eventually identifying several benefits if PMI developed targeted guidance on LLINs customizations. Cost savings could reach up to $7 million per year—enough to purchase an additional 3.5 million nets for families at risk of malaria. Order fulfillment lead times could be reduced by as many as five months, increasing the time countries would have to plan for the year ahead and enabling a quicker turnaround for emergencies. In addition, if all countries were using similar nets, PMI could much more efficiently and quickly shift stock between countries in emergency situations such as natural disasters, weather changes, disease outbreaks, or other unexpected shortages.

The analysis further found that LLIN variations largely came from small details, like custom artwork on the packaging and added accessories. Although the benefits of reducing the available options seemed clear, GHSC-PSM also wanted to be sure that reduced options wouldn’t have a negative impact on users at the household level. The project’s literature review found that most countries were, in fact, already requesting similar nets: for example, 98 percent of all LLINs were rectangular and 64 percent of nets were white. Many net users stated that the rectangular nets fit the most sleepers and that they were easiest to hang. While users in several countries mentioned that colored nets hid discoloration for longer periods, additional research found that net color had negligible impact on a family’s decision to use it. In one literature review considered by the project, although user preferences for shape and color did exist, these factors did not significantly influence use and recipients largely used whatever nets were available to them.

A Problem Shared is a Problem Halved

After reviewing the assessment outcomes, in 2018, PMI issued new guidance that limited LLINs to eight variations that included white, rectangular nets only, with two options for height and material, no nails or strings, and limited artwork. To address concerns from malaria supply chain leaders in PMI-supported countries, GHSC-PSM engaged with decision makers early in the process to explain the new standards. When the time came to place orders, country supply chain leaders largely stated they felt prepared for the new standards.

Alhaji Hamisu Dauran, Former Zamfara State Malaria Elimination Program Manager in Nigeria, noted that malaria programs faced no challenges in distributing the nets with PMI’s new standards, with 3.1 million LLINs distributed in Zamfara State during the 2020 campaign compared with 2.6 million in 2016. “In 2016, [Zamfara State] was not fully involved in planning and implementing net distribution. However, in 2020, the state fully led the process. The integrated model of the campaign made the state fully committed to deploying the required resources with a significant difference observed between the net distribution in 2016 and 2020,” he said.

The increased interchangeability of the LLINs across countries also increased PMI’s ability to be responsive and flexible in responding to urgent country need for LLINs. In the past, when a natural disaster like a hurricane created an urgent need for LLINs in a country, it would have been difficult to reallocate another country’s order to the disaster victims because they would have been produced with different country logos, for example. After the new guidelines, this became much easier. 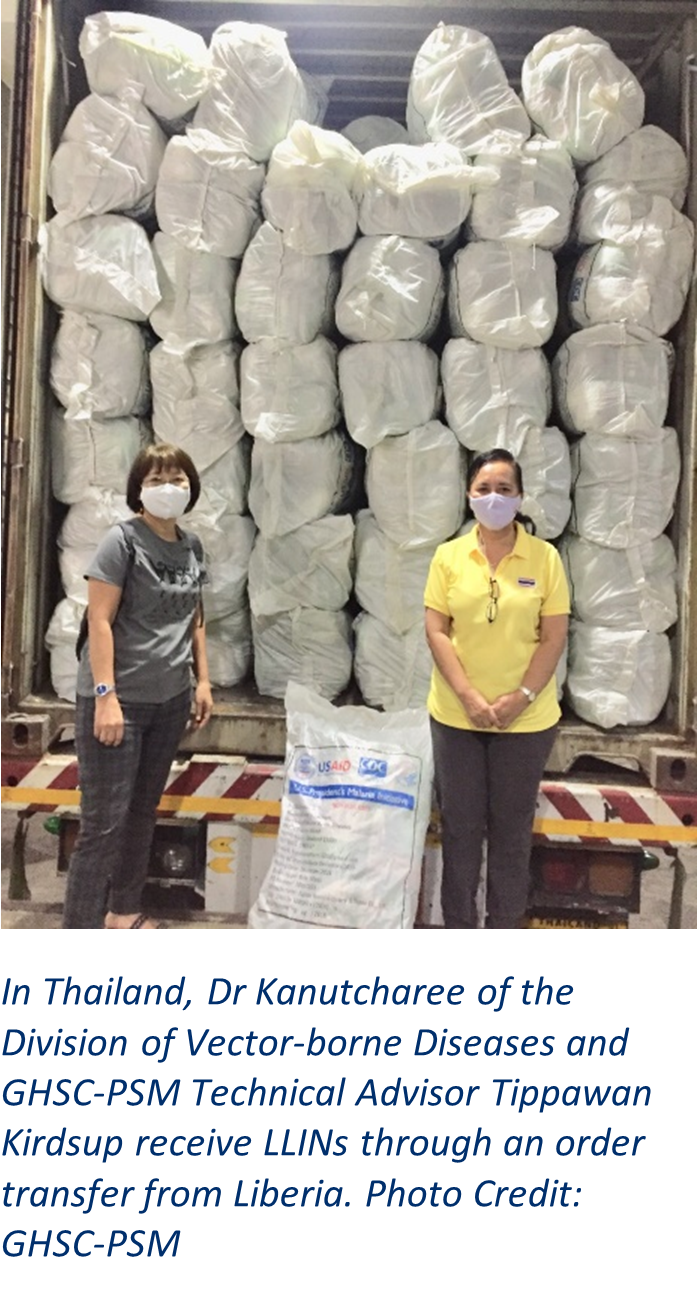 In one instance, Liberia requested to split an order of LLINs into two deliveries to conserve warehouse space that wouldn’t have been sufficient to hold the large bales for the full order of LLINs. The project arranged for the manufacturer to store the nets until Liberia was ready to receive them, but in the meantime, the project’s Thailand-Laos team realized that the country was heading toward a potential stockout before their next order of LLINs would be delivered. GHSC-PSM LLIN Supervisor Marcus Hall explained, “Since we’d reduced the variations in what countries could order, the Liberia nets waiting at the warehouse turned out to be the same as what was needed in Thailand. We were able to work with the country teams and the manufacturer to send those nets from the manufacturer’s warehouse to Thailand so that they didn’t end up in a stockout situation.”

In Nigeria, the new guidance meant changes in color, branding and shape of bed nets. Although most of the nets Nigeria purchased were already white, a few states received blue and green supplies with country logos and others were used to receiving conical-shaped nets. The 2018 guidelines ensured that all LLINs that PMI supplied to Nigeria would be white, rectangular, and have only the PMI logo. Despite the change, the Head Pharmacist of the Benue Central Medical Store Abuku Patrick said, “The government and households accepted the changes in the new net specifications because they were already accustomed to using [insecticide] treated mosquito nets.”

While variety is often called the spice of life, simplicity has proven to have its benefits in the case of global insecticide-treated mosquito net orders. Fewer mosquito net specifications have allowed countries to streamline their orders, which reduced lead times by as much as three months. The standardization also contributed to the project’s total LLIN commodity cost savings of $20.3 million since 2016. Standardized LLIN procurement specifications provide greater flexibility for PMI and country malaria programs to work across borders as part of a global community against malaria, ensuring nets are available when and where they’re needed for the communities that can benefit from them most. 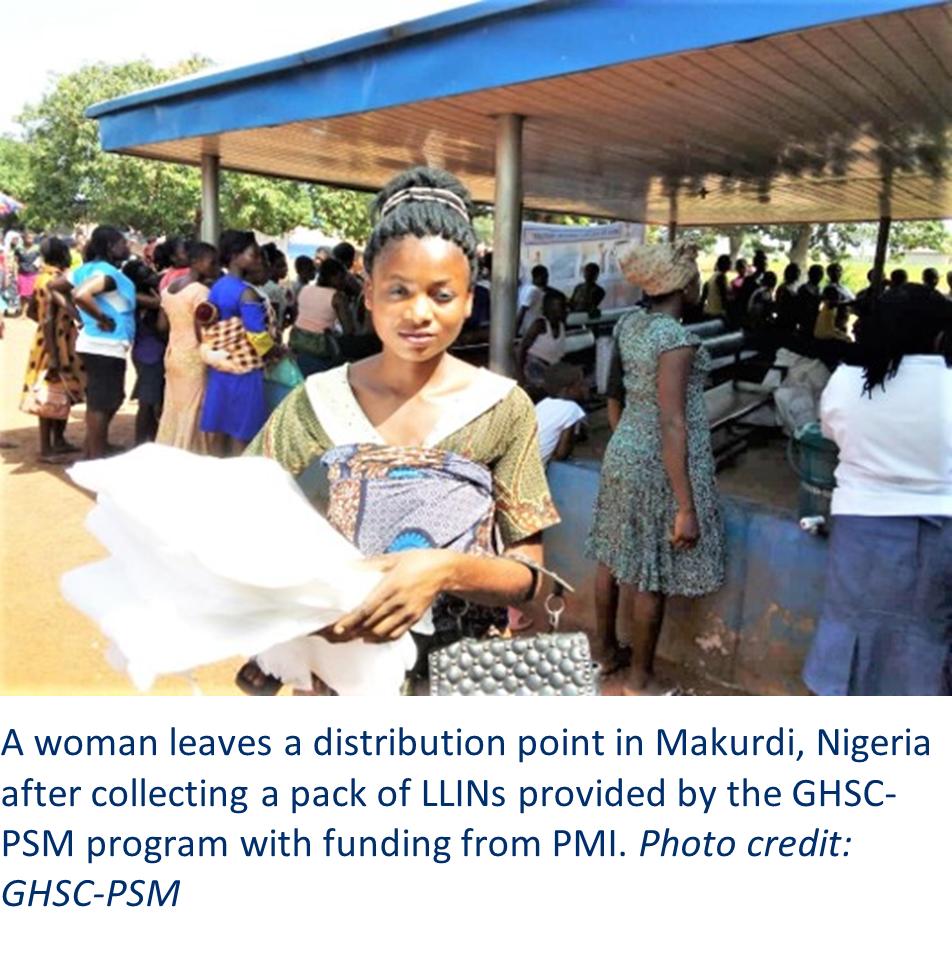 Success StoriesResponding to the Call
September 30, 2022
The Government of Ghana committed to vaccinating at least 20 million Ghanaians (87 percent of the population) by the end of 2021.
Success StoriesImproving the Quantification of Tuberculosis Laboratory Supplies in Ethiopia
September 29, 2022
Tuberculosis (TB) control and prevention activities rely on a well-functioning laboratory system. That is why the laboratory is the backbone for the programmatic and clinical management of TB. Despite this, TB laboratory services are facing many challenges that affect the quality and quantity of…
News ArticleAccessibility to PrEP Changing Lives in Zambia
September 23, 2022
Adolescent girls and young women in Zambia remain vulnerable to HIV infection. In fact, they are twice as likely as their male peers to contract HIV. Limited knowledge and education about the risks of HIV, high levels of risk behaviors such as intergenerational and transactional relationships, and…
END_OF_DOCUMENT_TOKEN_TO_BE_REPLACED
Twitter Embed