Seasonal malaria chemoprevention (SMC) campaigns are a key tool for many developing countries to prevent malaria in children under 5 years of age. SMC relies on four monthly doses of sulfadoxine/pyrimethamine and amodiaquine (SPAQ) for young children in preparation for rainy seasons in areas of high disease transmission in the Sahel sub-region of sub-Saharan Africa. In this region, 31 million children under age 5 were in SMC-eligible areas as of 2018, and 12 countries have scaled up SMC in collaboration with various global donors. The annual demand for SPAQ reached 120 million treatments in 2018, and is expected to increase in the future.

However, SMC campaigns are only effective if the supply of SPAQ is readily available and distributed prior to the period of greatest risk. Treatments need to be delivered during a tight 4-month window, adding further constraints to a process that is already constrained by a single WHO-prequalified supplier and their production limitation, given the number of orders across global donors.

As a result, SPAQ supply has been squeezed, causing competition among countries for the treatment. With demand soaring, the USAID Global Health Supply Chain Program-Procurement and Supply Management (GHSC-PSM) project began looking for creative ways to secure treatment availability.

GHSC-PSM, funded by the U.S. President’s Malaria Initiative (PMI), introduced a new strategy to mitigate supply challenges in 2018. By addressing global market as well as country-level constraints, as of 2019 the project ensured that several PMI countries in Africa received the SPAQ quantities they needed in time for their campaigns (see box), potentially protecting up to 6 million children.

At the global market level, the project streamlined procurement procedures by shifting orders from wholesalers to the manufacturer. GHSC-PSM worked with countries to place orders a full year before they were needed and prepositioned inventory at a regional distribution center in Belgium, introducing flexibility and responsiveness for last-minute quantity changes and delivery requirements from Europe to the Sahel sub-region.

Market-level improvements like these allowed country governments and global partners to shift their attention from global supply risks to the business of coordinating and delivering medicine to patients.

In Cameroon, for example, confidence in global supply, coupled with new geographic information system (GIS) tracking capabilities, strong coordination among national and district-level stakeholders, and a well-planned distribution strategy ensured that every one of the country’s 487 health facilities received supplies they needed well in advance of their 2019 SMC campaign; prior campaigns had reached fewer than 50 facilities. The campaign ultimately reached 6.7 million children from 3-59 months old in the country’s North and Far North regions. In total, 7.7 million treatments were successfully dispatched within 16 days, covering a surface area of 100,363 km2.

“With GHSC-PSM, we have no worries about the availability of medicines for the campaign,” said Dr. Djele Sali, Coordinator of the Regional Technical Group for the Fight Against Malaria in the North. “I wish other partners would follow their example to ensure that all other material is available for a hitch-free campaign.”

In 2019, GHSC-PSM also subcontracted SPAQ warehousing and packaging to Cameroon's regional medical stores (RMS), which then worked with private distribution companies. This was the first time the RMS played a prominent role in a large-scale SMC campaign and in such a short amount of time. The success of RMS’ efforts is a strong sign of growing capacity and self-reliance in Cameroon. Other PMI countries achieved similar results, responding quickly to transportation and other sudden constraints. 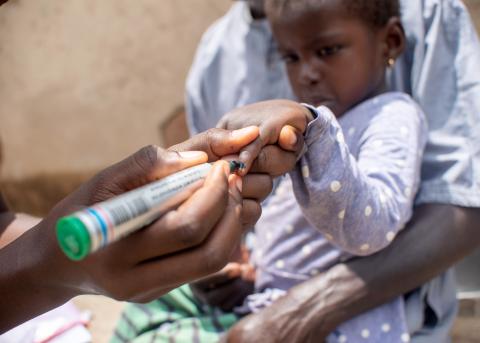 In Niger, the two PMI-supported regions, Dosso and Tahoua, received their commodities well ahead of the 2019 SMC campaign. In accordance with the distribution strategy, commodities were pre-positioned at 17 district stores servicing 273 integrated health facilities, targeting 1.3 million children between the ages of 3-59 months. More than 4.8 million treatments donated by PMI, the World Bank, and Global Fund to Fight AIDS, Tuberculosis, and Malaria (Global Fund) were successfully dispatched within 5 days, in collaboration with the central medical store transportation fleet (ONPPC), covering a surface area of 147,215 km2.

Ghana’s 2019 campaign ran from July to October, with all SPAQ commodities delivered to the country level in May 2019. The PMI-supported Northern region received 2.5 million treatments, targeting over 670,000 children between 3-59 months old. Treatments were sorted and dispatched to 615 health facilities in the Northern region in four waves. Each delivery took place over seven days prior to each of the four dosing cycles, covering over 70,000 km2.

In Mali, the entire seasonal supply of SPAQ was delivered to the central level in April 2019, with distribution occurring from July to October. Distribution strategies varied widely by region due to geography and security considerations. In the Mopti region, for example, the Pharmacie Populaire du Mali (PPM) used their own vehicles as well as a variety of other modes of transportation including pinnaces (small fishing boats) and public transport. At the district level, further methods including trucks, carts, and motorcycles were used to bring supplies to community health facilities. In each case, supply chain managers made transport decisions close to the date of distribution so that they could respond to the latest security context. Overall, 3 million SPAQ treatments were delivered to seven regions (Kayes, Koulikoro, Sikasso, Segou, Mopti, Gao and Kidal), enough to protect more than 750,000 children between 3-59 months old.

GHSC-PSM continues to collaborate with global partners and manufacturers to further ensure secure, reliable supply for SPAQ and other antimalarial products worldwide. The project is collaborating with global partners and manufacturers to diversify the supply of SPAQ and ensure SPAQ is available in time for 2020 SMC campaigns and beyond. GHSC-PSM is also working with national government and local counterparts to sustain reliable supply in future seasonal malaria campaigns.

Success StoriesMonitoring customer satisfaction to respond to the voice of health facilities: Experience from Ethiopia
January 18, 2023
In this new series from GHSC-PSM, we are sharing recent insights and lessons learned from across our country programs. In this fourth and final article, we discuss how an annual customer satisfaction survey, and a web-based customer feedback monitoring system are helping the Ethiopian…
News ArticleLeveraging Technology to Improve HIV Commodity Quantification in Nigeria
January 11, 2023
With an estimated 650,000 deaths globally, the AIDS pandemic took a life every minute in 2021 despite effective HIV treatment and tools to prevent, detect and treat opportunistic infections. Of this number, about 51,000 persons reportedly died from AIDS-related ailment in Nigeria, which has an…
Success StoriesBuilding a specialized cold chain to deliver COVID-19 vaccinations in Namibia
January 3, 2023
This story first appeared in, “Driving Last-Mile Solutions to Ensure Access to Public Health Commodities.” Because of the important insights and lessons learned that it provides about cold chain and ultra-cold chain for COVID-19 vaccines, we are republishing and resharing separately.  The…
END_OF_DOCUMENT_TOKEN_TO_BE_REPLACED
Twitter Embed